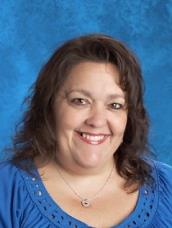 Angie White was born and raised in Caldwell County. She received her Master's degree in Communication Disorders from Appalachian State University in 1993. After working as an SLP in the medical setting for 5 years, she came to work for the Caldwell County School System in 1998. Davenport has been her home school since that time, and she is also responsible for the speech/language needs at Kings Creek Accelerated School, as well as various preschools in the county.  She began serving as Lead Speech Therapist in 2006.  Her special interests in the field of Speech Pathology include Phonological Disorders and Autism Spectrum Disorders. She is a member of the Caldwell County Interdisciplinary Team evaluating for Autism. She is married and has two sons. Her husband is a captain at Lenoir Fire Department.  Her older son works with Caldwell County EMS and her younger son is attending CCC&TI. She feels very blessed to be given the opportunity to work in such a wonderful school district, doing a job that she loves!