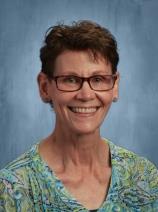 Favorite Educational Quote and Why
"I can accept failure, everyone fails at something. But I can't accept not trying." If Michael Jordan, one of the greatest basketball players, says it okay to fail, then it must be true. You may fail at many things in life, but if you never try, you'll never know what you can do. This is so true for my math students, all I ever ask is that you try and don't quit on yourself.

Favorite Place in Caldwell County
I enjoy going to the Caldwell County Public Library, their staff are some of the nicest people I've met. I always leave with a stack of books. Then, I hit Camp Coffee, their lavendar honey lattes are the best. I bring it all back to my front porch where I sit and relax watching the birds at their feeders.

Favorite Activities
I enjoy being outdoors and love to go walking through my woods and wading in our creek looking for treasures like feathers and cool quartz formations. Sometimes, if I'm lucky, I come across an animal skeleton that I can clean up and bring into my classroom! I'm not a great gardener, but I do like growing summer vegetables and tending to my flowers. I also love curling up with a good book or magazine.

In March 2022, a stray female cat adopted us and in April she gave birth to four beautiful kittens. They are going to be our barn cats as we already have three indoor cats that also came to us as strays and adopted us!

My "Why"
"Integrity First, Service Before Self and Excellence In All We Do"
These are the Air Force core values and the values I try to carry over into my classroom.
I served for more than 20 years in the United States Air Force, retiring as a Master Sergeant in August 2005. Our family decided to make one final move to be closer to the rest of our extended family and we relocated to Lenoir in 2006.
I chose the science concentration because I want my students to realize that science exists all around them. I have always enjoyed investigating and discovering new things and I want to pass that onto my students.
I decided on the mathematics concentration because as a student, I struggled with math. I always felt that everyone “got it” except for me. I believe that I can understand and relate to why many students feel discouraged in math and I want to work with them to help them realize that they can be successful, and yes, grow to like math!