The hurricane began at a category four and eventually hit land at a category three. After hitting land the hurricane became a tropical storm with strong winds and heavy rain. There have been multiple reports of severe damage along the North Carolina coast. Many residents near the coast were told to evacuate because of the dangers that were to come. The death toll of Hurricane Florence has reached around thirty-nine in North Carolina. This does not include injuries or other fatalities in the other states.

Hurricane Florence has caused a catastrophe for many North Carolina people. The strong winds have torn down thousands of buildings and homes. The heavy rains have caused widespread damage and flooding. But on the positive side of things, more people are coming together to help those affected. People are donating their time, money and supplies. They are traveling long distances to assist families rebuild their homes. Helping those in need, that is what it is all about.

A message from CALDWELL COUNTY SCHOOLS

Even though Hurricane Florence is only a dim remembrance of what could have been, there are still school districts in Eastern NC closed due to the devastation of the storm.  Pender and Craven County Schools began opening schools this week, and their students are returning to classrooms that have been completely stripped of furnishings, resources, and basic infrastructure, due to mold. Some schools are questionable as to their future usability.
We have contacted these two school districts, and they are in dire need of school supplies for students. Some families have lost everything and actually lived in schools that served as emergency shelters for two and three weeks. These schools have also undergone a complete overhaul.
From now until October 30, the Caldwell County Schools will be collecting the following for Pender County Schools and Craven County Schools:
Each Caldwell County School will be a collection point, and there will be a yellow school bus parked in front of the Education Center during the School Supply Drive. The Education Center will be a primary collection point.
Please consider helping these families and schools. With your donations listed above, we will fill a yellow school bus with needed supplies and with kindness and caring that western North Carolinians understand and embrace, especially in Caldwell County.
This is a wonderful community and together, we will help them return to school! 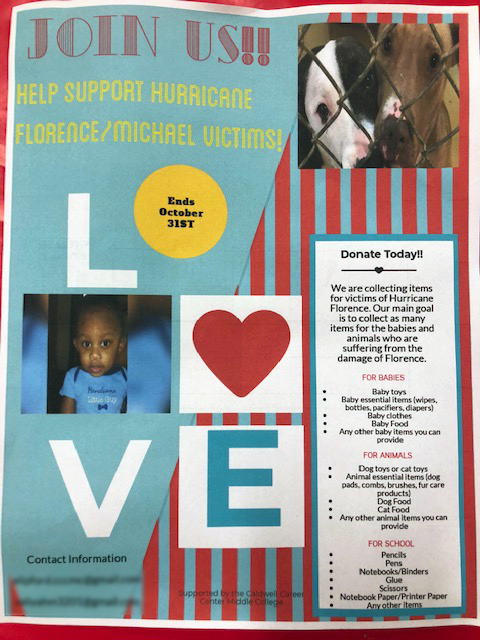